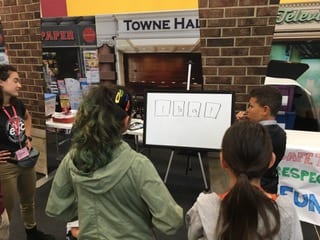 Young AmeriTowne On the Road staff just returned from two fun-filled weeks of summer camp at Moorhead Recreation Center in Aurora.  In total, 46 students participated in two different camps, Young AmeriTowne and Junior Money Matters, experiencing a hands-on lesson in financial education.  And even more important, students gained confidence and education that will carry over into other aspects of their lives. Campers participating in AmeriTowne On the Road at Moorhead work together on a business name for their shop.

When Malachi* arrived at camp, he was shy and unsure about trying something new.  All of that changed during a lesson about bank accounts, when Micah served as Bank Teller.  He was responsible for helping students deposit paychecks into their accounts and for giving them the correct amount of cash back.  “I believe that the unique ‘hands-on’ setting of AmeriTowne, sparked his engagement at camp,” said Camp Director, Susan Weimer.  She added that Micah even ran for Mayor the next day, delivering a speech to his peers, and he made it all the way to the final round of elections.  “The camp counselors and I were all so proud of how Micah came out of his shell,” she said.

Another camper, Dominique*, also developed confidence at camp.  At the beginning of the week, Dominique seemed bored by some of the camp activities, and she said things like,”I don’t want to do this.”  But running for Judge changed all that.  Dominque prepared a speech that wowed her fellow campers.  And even though she didn’t win the election, Dominque actively participated in activities for the rest camp.  Plus, the Young AmeriTowne experience convinced her to open a savings account so she could accrue interest.

In addition to confidence, the campers also gained money smarts during their time in Young AmeriTowne.  According to Susan, “Many of our families complimented us on how engaged their students were all week.  We heard that campers would go home after camp seeking conversations with their parents about saving, budgeting, and even investing.” Many national studies have found that many parents don’t talk about money enough with their children, so these discussions are particularly valuable.  “I really think these campers received lessons they can use well into adulthood,” said Susan.